Throughout yesterdays Charity Hack, Laura was tweeting and blogging about everything that was going on.

Here are her collected blog posts of the day.

I guess a quick introduction is in order before I continue to write and ruin Kevin's blogging style! My name is Laura Ryder, and today I'll be the chief Charity Hack blogger. I'll be bringing you updates throughout the day, to give you an idea of how Charity Hack is progressing and what our five chosen charities are getting out of the day. 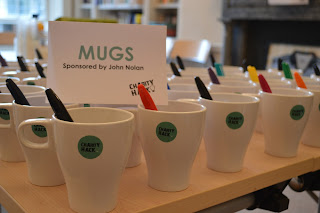 So we’re almost at our first official coffee break at Charity Hack and already I think the wheels are really turning.

Of course the approximate 60 cups of coffee (big shout out to 3FE for that by the way, and to John Nolan for sponsoring the personalised Charity Hack mugs) that have been consumed already (everyone else's blood system is half caffeine like mine, right?!) between this morning’s welcome cup and what we’ve been drinking to fuel the brain cells from what some would say is a very early hour on a Saturday morning has probably helped grease those wheels.

I'll let you in on a little secret. I used to do a show on a community radio station with a friend (who is also a hacker today actually). We used to do the show at 9pm on a Monday evening, and he would prepare for it by drinking LOTS of coffee and writing the funniest - but the most off the wall - sketches.  My nightmare right now is that the ideas we come up with for Charity Hack charities are like those sketches - genius, but crazy.

I know they won't be though. There's far too much talent in this room in O'Connell House on Merrion Square in Dublin for that to happen. And worst case scenario of course we have fruit from The Fruit People and flapjacks and healthy muffins from Eimear to soak the coffee up!

Already today has been amazing. All five charities turned up ready to go, and hackers were all on site by 8.15am this morning! After a quick meet-and-greet we moved on to a three minute introduction from each charity, before everyone grabbed a pen and jotted down their thoughts on each charity. (You can read profiles on four of those five charities in earlier blog posts by the way.) After that each charity was assigned a project manager and team members and since then we've had five groups of busy bees enthusiastically working away. Working away so enthusiastically that everyone's been told to take a coffee break...and it's led to nothing but a continuation of the buzz of work and nobody moving anywhere near the break area.

Here's hoping the buzz continues right through to 9pm tonight, when we should have five cracking charity campaigns ready to roll out!

Walking on the Wild Side 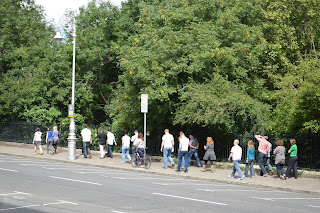 If Merrion Square has any wild sides, we've just taken a walk on them.

No, really, we went for a walk around Merrion Square. It was a precursor to lunch, which I'm reliably informed was delivered by the good folk at KC Peaches.

Much like Charity Hack (I hope), lunch didn't disappoint. A selection of sandwiches and salads were accompanied by a cheeky pink lemonade, and though our charity hackees haven't by any means been treated with kid gloves so far the air was generally one of friendly camaraderie.

Not that it matters, you understand - we're here for positive change for charities and not to make new friends. Although sure if that happens too so much the better. The mantelpiece has always space for another few Christmas cards.

To be honest by lunchtime we all needed a bit of fresh air. Already we'd put in almost four hours of hard work, and we don't wrap up until 9pm tonight.

Some great stuff has come out of this morning's session though.

Shortly before lunch I spoke to Mindy from Voice of Irish Concern for the Environment, Simon from Rainsbows Ireland, Caroline from Irish Deaf Kids, Siobhan from ACT4Meningitis and Bernadette from Care After Prison.

I asked all five how they felt when they arrived this morning and also how they felt after a few hours of work. I'll post the interviews (which were filmed by James Keating) separate to this post, but I can tell you that the mood this morning was mostly optimistic with a hint of nerves.

All five reported being challenged during this morning's Charity Hack session, and having to constantly remind themselves to keep an open mind and not take questions or challenges to what their organisation is doing personally.

However all said their optimism and positivity was still alive somewhere in the region of 12.15. And they promised they were being honest.

To be honest if Charity Hack's hackees have come out of this morning feeling positive they can pat themselves on the back for being mature in the extreme.

In the words of Charity Hack chief Kevin this morning was "about looking at the organisation and learning about them and their problems". Constructive criticism - providing fun the world over for centuries, hey?!

This afternoon we're moving on to sorting the problems highlighted this morning though, so to be honest I'm anticipating everything being sorted by tea time, or so...

I've just heard each group is pitching their best two ideas in ten minutes too, so I'll keep you posted!

The countdown clock - and frequently cardinal hacker Kevin - tells us there's only three hours and 40 odd minutes left. That means more than two-thirds of Charity Hack is over. But after more than eight hours of effort another three hours plus is a long time.

I've every faith Bernadette will pull through though. Optimism, gratitude and a big dash of love will get her to 9pm.

Working with Bernadette for Care After Prison are her champion companions Justin, Holly, Bronagh and Breifne. A post-lunch pitch of their two best ideas by Justin prompted applause. It's one of those ideas the fab four are progressing today, with plans to activate the other later this year.

Bernadette is a big fan of the two ideas being worked on that will both raise awareness of the Care After Prison cause as well as potentially raise funds. "They're really easy to implement and we can start running with both of them," she told me, explaining her support.

Today Charity Hack experts have suggested building up the relationships Care After Prison has with schools. Whereas before the end of a school visit was followed with a goodbye wave, from now on it's hoped it will be just one strand in an ongoing relationship that will see the school help ensure Care After Prison's survival by hosting a fundraiser in the wake of the visit such as a coffee morning.

As I write Bernadette's group has split up (amicably) - Breifne is compiling a database of schools, Holly and Justin are working on the fundraising product and Bernadette and Bronagh are looking at the letter that might be sent to schools outlining the project.

The school project isn't the only thing Care After Prison will have going for it as a result of Charity Hack however. A simple but effective second plan is just waiting to be unleashed later in the year. That plan - dubbed 'A Mother's Voice' - includes mothers and tea bags, and we all know how powerful that combination is.

"I'm knackered," Bernadette said just now, before adding that she's "a little bit in love with everyone". "I know I started the day saying I'm feeling emotional," she said, "but I just want to hug everyone. They're giving 100%. They're so into it - even referring to the charity as 'us'. I'm overwhelmed to have so many brilliant people giving us their all."

As tired and emotional people go, Bernadette is one of our favourites!

I laughed with delight when this arrived - the first of our Charity Hack videos :)
Laura

Times Flies When You're Having Fun

Siobhan came to Charity Hack planning a national meningitis awareness day, but she's leaving determined not to restrict spreading awareness to just the one day.

ACT4Meningitis is a countrywide operation that's based in Galway. To date it's really only recognised for its work in Galway however, so from here on in the aim is to become a recognised brand with functioning services in Ireland as a whole and then the world.

I'm lying. They're actually planning on sticking to Ireland. But Charity Hack has been going for over nine hours now and I'm a bit giddy.

Siobhan's giddy too for what it's worth. She's also oozing appreciation and enthusiasm for her every pore. I suspect that as much as she's loving Charity Hack she can't wait for it to end so Monday will come sooner and she can get cracking on her plans.

"I'm actually very excited about plans we're going to put in place next week," she said, in our post-teatime-pizza chat. "We're going to start working on our strategic plan straight away, and start training volunteers as awareness ambassadors for the charity."

Awareness ambassadors you say Siobhan? Do tell us more!

"We came in with an idea to organise a national awareness day," Siobhan explained. "After sitting down and talking to hackers, and working through where the charity is at, we've decided why isolate our awareness to just one day? We've now decided to sit down and put a strategic plan in place. We're going to move around the country to do awareness in different places around the country, where people want to meet - and help - the charity."


Awareness roadshows will be announced two weeks in advance using social and local media, while the event itself will give locals the opportunity to get information about meningitis and find out more about ACT4Meningitis.

Looking towards the final push on this inaugural Charity Hack, Siobhan says she's still energised. "The day went an awful lot quicker than I thought," she says. "It's been an absolutely amazing experience. Everyone just kept bouncing ideas off each other and that made us more eager to try and put those things in place. We've new exciting plans for the charity and I'm looking forward to facing into the last three hours."

The End Is Nigh

It's almost time to toast our success at Charity Hack, but we can't end without filling you in.

I think I can say with confidence that everyone to a (wo)man is exhausted. It's been a tough Saturday. Using a whole bunch of different skillsets from videography to fundraising to writing to strategising and everything in between we've all put in an honest day's work.

Right now hacker-in-chief Kevin is asking who wants to share their experience, and Mindy from Voice of Irish Concern for the Environment has jumped right in, more than eager to share.

For one and all this has been a positive experience. Charities are leaving with concrete and suitable plans that can be rolled out from now. Hackers and other volunteers are leaving knowing that they have made a difference.

For everyone Charity Hack has made a difference. And that's a great feeling to have at 9pm on any evening.

Thanks for that inspiring post and I love it.

Keep it up and we are proud of you click here the family international.