As the dust settles...

I've had 48 hours or so to think about Charity Hack.

What happened, what it was like, the good, the bad and in the case of some of the pictures of me, the ugly.

and the truth is I'm still not sure what to say.

Let's start with the basics.

By 8:50am on Saturday morning everybody was there.

There were too many Chackers to name but you can find them all on this handy list
https://twitter.com/TotalFR/charityhack-ers

and we were also joined by our journalist Laura, photographer Eimear, videographer James and artist David

Excited, nervous chatter mixed with the clinking of the very sexy Charity Hack mugs as hugs were exchanged between people who had only ever met on Twitter. There was something in the air but none of us were sure what that something was.

But I know now what it was.

This group was ready to fight

You see everybody came to Charity Hack as strangers. They'd come across this odd little concept on Twitter or posted on a website. It sounded interesting, maybe fun so why not give it a try.

This group of Charity Hackers believed that you should: 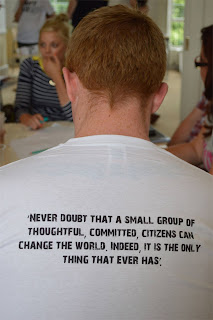 This was a group, whether members of the charity or the legion of chackers, who believe in standing up for the little guy.

And boy do they know how to fight..

From the very start nothing was safe.

No strategy, No long held desire for a specific campaign, No excuses, No board members and No CEOs

Each team tore into their task determined to find the problems at the heart of the organization, to polish the gems, to remove time wasters and find a way to move forward.

Did it hurt? Hell yeah, but this wasn't a malevolent aggression.

Love in the truest sense. Like the way two friends can be completely honest with each other because they know they are safe. The way brothers can come to blows before wiping away each others tears.

The morning was brutal,

But just like the blisters caused by digging up a flower bed are worth it when the spring brings new blooms.

The afternoon made the morning worth every bit of pain.

Chackers and charities united as one.

We've found the problem and we're not giving up until we've solved them.

We began Charity Hack hoping we would create 5 new fundraising campaigns over the course of 12 hours but we got so so so so much more.

But I think that two much bigger things came out of Charity Hack.

For the charities (and this is just my thought) I think they grew in confidence because a group of talented, passionate people looked really hard at their organization, fell in love with their cause and then looked even harder so they could find some solutions to their problems. They realized that people do care about them, do want to help them and that their organization has a bright future.

The Chackers? Well I'd like to think they caught a glimpse of their own untapped potential. Young talented professionals, unleashed from the constraints and admin of their day to day jobs, tore into their tasks, dug deep into themselves to find answers to problems when at the start the problems looked too hard. They realized what that can achieve if they are willing to give until it hurts.

What do the rest of get out of it?

I hope that we get to see these amazing charities grow and make out little country even better than it is because that what they're trying to do.

I hope that these amazing Chackers are recognized for their abilities and heart wherever they go so that they can be the change-makers in this Society.

Right now, I need to rest.

PS: I can't thank everybody, who made Charity Hack possible, enough. The sponsors, the volunteers, the people who helped publicise Charity Hack, who gave advice and support or any of a thousand other things. If I can ever help you, you need only ask and I'm there.

And, as Bernadette said towards the end of the day..."I'm a little bit in love with everyone".

It was such an amazing feeling to hear each of the charities tell their stories of the plans in place after 12 hours. It was emotional (yes i am a man admitting that)

Dreams were born on the 10th of August through Charityhack

Kevin and your team please take a bow

Youtube Subscribers
Thanks a lot for blogging this, it was unbelieveably informative and helped me tons.